In recent years  the world has witnessed a huge increase in demand of energy. Hence, mankind is now compelled to develop and use new technology to recover from non-conventional resources.

This calls for new technological developments whose application can cater to the global energy needs. One such development is multi-stage well stimulation in horizontal wells. The two most common methods of multi-stage horizontal well stimulation i.e., widely used “plug & perf method” and relatively new “ball & sleeve method”. StoneWall closely examines their feasibility of economical as well as time aspects.

Well Stimulation is a technique used to improve the well productivity/ injectivity by applying various reservoir and/or wellbore treatments. This process aims at minimizing reservoir damage or eliminating production problems. It fulfils the following basic requirements:

Since the inception of this technology though new engineering and design methods, its scope has increased by many folds. Earlier its applications were limited to conventional reservoirs with vertical orientation. With latest advancements in technology like horizontal well completion we got better methods for infill drilling and reservoir depletion.

Unconventional reservoirs have been defined as formations that cannot be produced at economic flow rates or that do not produce economic volumes of oil and gas without stimulation treatments or special recovery processes and technologies.

The use of limited entry and bull-heading techniques provided little benefit compared to vertical wells. Post production analysis on the deliverability of horizontal wells in reservoirs such as matrix, heterogeneous and non-conventional formations showed a direct correlation to the completion and stimulation methods employed and their shortcomings in horizontal applications.

Thus, the added expense of a horizontal well was not justified by the equal to or slightly better production results versus vertical wells. Thus for efficient exploitation of the non-conventional plays and to fulfill the ever increasing global energy demand Multi Stage Horizontal Well Stimulation was introduced.

The goal was of increasing access to the reservoir through the induction of fractures along the entire length of the horizontal wellbore. Since then extensive research has been done in this field which provided satisfactory results and remarkable increase in production from horizontal wells.

This system comprise of the traditional methods of fracturing in multiple number of stages. The number of stages vary according to the extent of the horizontal well in the reservoir (usually 1000’-1500’). This technique called off for introduction of new improved equipment whose details have been provided further in the paper.

Although an effective method of creating diversion along the horizontal for discrete stage stimulation, the inherent cost of multiple interventions with Coiled Tubing, perforating guns and deployment of fracturing equipment needed for each stage are extremely high, not to mention, very inefficient and time consuming (Houston et al., 2010; Samuelson et al., 2008).

Production using this method can also be limiting, as cementing the wellbore closes many of the natural fractures and fissures that would otherwise contribute to overall production (Themig, 2010).

The technique requires multiple trips in and out of the well to accomplish individual components of an overall fracture stimulation completion. The first step in the process is to get communication from the tubing to the annulus at the toe of the well.

Perf and plug uses a perforating assembly to initiate a fracture by using shaped explosives (perforating gun) Once the perforation has been created, the assembly is run out of the hole and the wellhead is rigged up to pump trucks so that proppant can be injected into the fractured zone.

Once completed, the pumping equipment is detached and a new perforating assembly coupled with a mechanical plug is run into the hole and set to isolate the treated zone from the next highest zone targeted for stimulation. There the perforation assembly is triggered to initiate the fracture in the new target zone, which is run back out of the hole to allow for the pumping of proppant into the fracture.

This process continues until all zones within the well have been treated. The description of the fracturing fluid and proppant are as follows:

In 2000, the development of open hole mechanical diversion was placed at the forefront of research and development. Over the next two years various product components and systems were tested and deployed in the field. These tests led to what is now the standard system for open hole completions, with more than 300 successful runs to date.

Uncemented , open hole, multi-stage (OHMS) fracturing method or in short Ball and Sliding Sleeve System :  OHMS were pioneered in 2001 with the goal of making multi-stage fracturing more efficient, both in terms of time and cost, as well as repeatable and reliable (Seale et al., 2006; Seale, 2007). OHMS use hydraulically set mechanical external packers instead of bridge plugs and cement to isolate sections of the wellbore.

These packers typically have elastomer elements that expand to seal against the wellbore and do not need to be removed, or milled out, to produce the well. Instead of perforating the casing to allow fracturing, these systems have sliding sleeve tools to create ports in between the packers.

These tools can be opened hydraulically (at a specific pressure) or by dropping size-specific actuation balls into the system to shift the sleeve and expose the port. The balls create internal isolation from stage to stage, eliminating the need for bridge plugs .OHMS permits that all the fracture treatments can be performed in a single, continuous pumping operation without the need for a drilling rig.

Once stimulation treatment is complete, the well can be immediately flowed back and production brought on line. By developing a system to set in open hole, provide mechanical diversion and allow multiple fractures to be performed along the entire horizontal wellbore, all the problems associated with horizontal completions to date have been addressed. The packer would be required to sustain differential pressures of 10,000 psiat temperatures up to 425OF and set in holes enlarged up to 50%.

The stimulation sleeves also have the capability to be shifted open by landing a ball on a ball seat. The operator can use several different sized dropping balls and corresponding ball-landing seats to treat different intervals. It is important to note that this type of completion must be done from the toe up with the smallest ball and seat working the bottom/lowest zone. 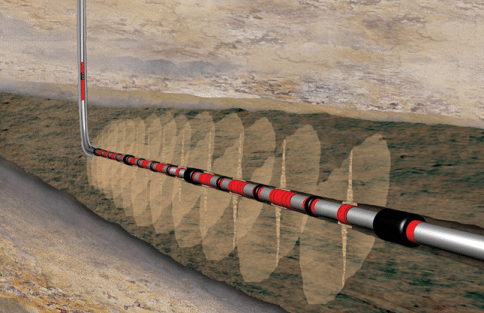 The Ball Activated Sliding Sleeve has a shear-pinned inner sleeve that covers the fracture ports until a ball larger than the cast iron baffle in the bottom of the inner sleeve seats on the baffle and a pressure differential sufficient to shear the pins holding the inner sleeve closed is achieved to expose the fracture ports. When a ball lands on its specific seat, it isolates any zones treated below it and hydraulic pressure applied above the ball shifts the sleeve to the open position and aligns the ports to treat the next zone.

The opening balls are phenolic and can be either drilled up or flowed back to surface once all the treatments are completed. The landing seats are made of a drillable material and can be drilled to give a full wellbore ID. When a ball injector was used, it was not necessary to shut down the pumps between stages.

The shifting-tool profile remains in the inner mandrel so the operator can still engage and close a selected sleeve once the balls and ball seats are drilled out. Using the stimulation sleeves with ball-activation capability removes the need for any intervention to stimulate multiple zones in a single wellbore.

The description of Stimulation sleeves, swelling packers and ball seats are as follows:

Want to know how StonewALL CAN DESIGN YOUR WELL STIMULATION tOOL? cONTACT US BY FILLING OUT THE FORM!